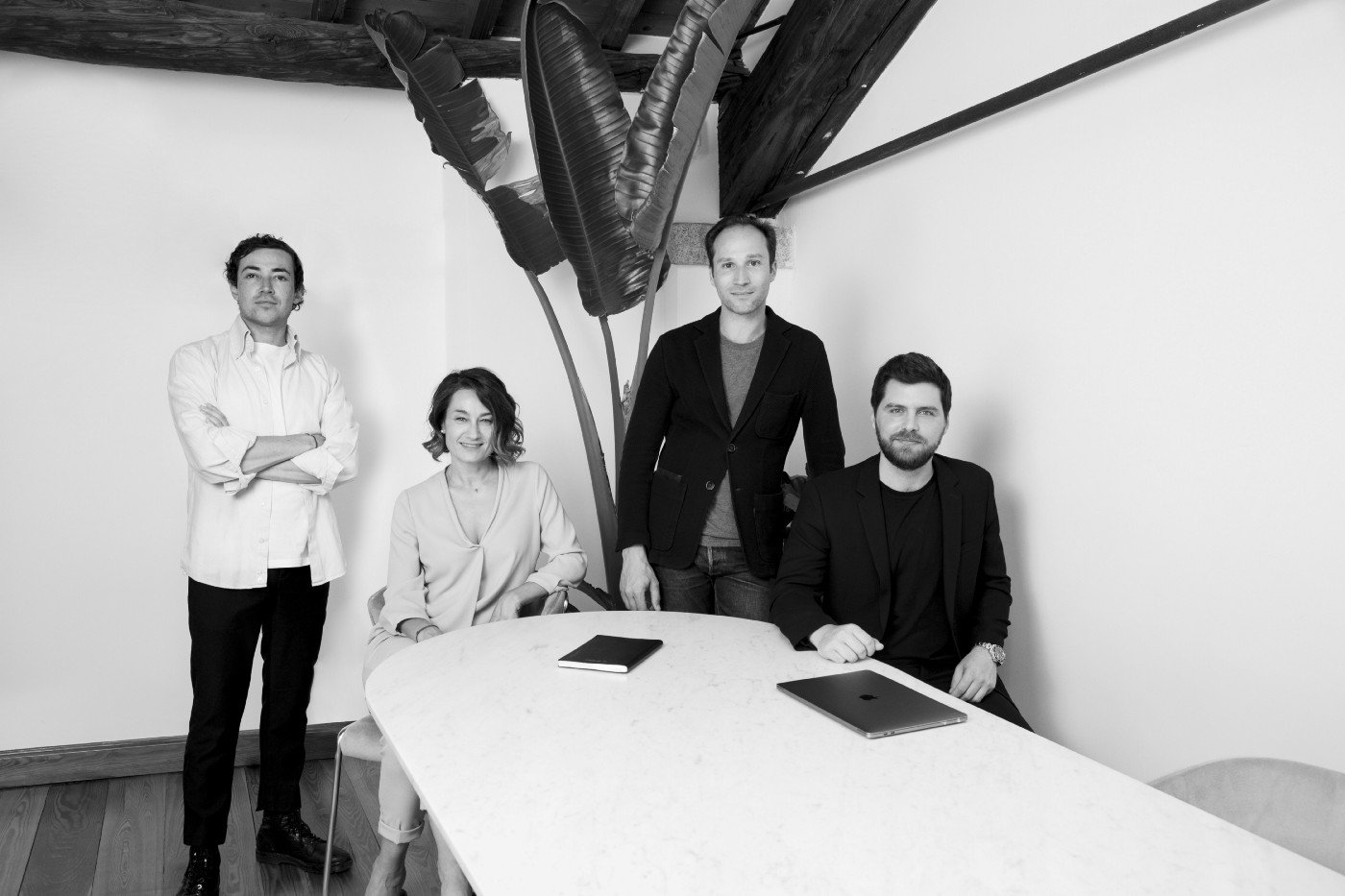 Since its beginnings, YKONE has positioned itself on the Paris-Milan axis by working with a number of prestigious Italian brands and helping them launch their social strategies. As early as 2010, YKONE worked on campaigns such as Bottega Veneta on their first-ever influencer collaboration, Diesel in the early days of influencer marketing and Armani on the launch of their EA7 line. A slew of impressive signatures that solidified their place in the hearts of Italian brands.

YKONE Founder and CEO, Olivier Billon, always had a deep appreciation for Italian brands, especially those that managed to preserve their family heritage — Versace, Diesel, Prada… Matteo Baldi himself works with his two sisters and sees business as a big family where the dominant values are trust, respect, generosity and benevolence.

“Part of the results is a question of trust”
Matteo Baldi

In retrospect, Olivier humbly admits that he regrets not having opened the Paris office in tandem with the one in Milan. In the fashion, jewelry and luxury markets, Italy and France hold equal stakes. Two conductors leading one beautiful orchestra, Olivier would’ve liked to orchestrate the openings of the two agencies in the same Franco-Italian score.

It isn’t until March 2019 that YKONE finally opens its Italian counterpart in Milan, the second fashion capital of the world. Highly anticipated by YKONE’s clients and partners, the new office quickly proves to be a window to the Italian luxury market, a market highly in demand by brands across the world.

Olivier needed to find his Italian composer to create the perfect score. That person turned out to be Angela Masiero, who had previously worked at major international media groups such as L’Officiel magazine, Emap Groupe and Le Figaro. Angela acquired her expertise by managing the Italian brand portfolios of these brands, and after 10 years managing the Italian office of Jalou Media Group and L’Officiel, she was ready to take on a new challenge.

The idea of joining forces with an external partner began to take shape several months after the opening of the Milan office. After two successful years of YKONE Milan in which Angela and Olivier managed to affirm and build the agency’s reputation, the time had come to take its development to new heights.

Armed with an international network of agencies, a data-driven approach and a diverse team of creatives, Olivier’s goal was to partner with the best in the field. Naturally, Matteo came to mind — the established entrepreneur had experienced a similar success with his digital communications agency, MB New Media in Milan. Olivier proposed a partnership that would allow the two companies to consolidate the Italian luxury market and affirm their status as world leaders in Influencer Marketing. A big Italian wedding indeed.

YKONE and MB New Media Agency: A match made in heaven

The idea to create MB New Media Agency first came about as an observation. Matteo and his business partner Enrico De Finis had been active for years as consultants in Public Relations and fashion marketing. They became increasingly aware of a growing demand for digital marketing and the ever-evolving mediascape that called for a new way of doing business.

Together, they utilized their extensive expertise of the industry and network of connections to launch the opening of MB New Media Agency in the heart of Milan. The agency would provide a solution to international brands to grow their digital presence through influencer marketing and social media. Not before long, the agency quickly rose to renown through its starry roster of Italian and international clients. A year later, the agency launched their Social Media Management & Content Production division in order to meet the growing demand from brands. Step by step, MB New Media was expanding.

In 2016, MB New Media Agency became known as the Italian leader in fashion influencer marketing. As their scope widened, so did client demands, and the agency launched their new Talent Management division. The new division quickly proved worthwhile as influencers flocked for support during international Fashion Weeks, and to secure collaborations with the world’s most prestigious brands.

Their team consists of strategists, photographers, social media experts and creatives ready to respond to any need. Over the years of successes and challenges, MB New Media has honed its ability to offer customized tools to ensure dynamism and authenticity to its clients and partners.

From that point on, it was love at first glance, and all the conditions were right for the most romantic of engagements… right down to the ring on the finger for the two partners — the creation of YKONE Baldi.

‘Till Death Do Us Part

Matteo had previously studied law for a year in Paris, allowing him to learn the language and become familiar with French culture. Looking back on his career, Matteo recalled that he was first seduced by the world of influencer marketing thanks to the unforgettable encounters he made, such as that of his lifelong friend, Chiara Ferragni. It was by her side that he made his debut, traveling with her, photographing her as a fan and friend, taking part in shoots, and even accompanying her to Fashion Weeks all over the world.

Throughout this experience, Matteo acquired the most valuable life lessons, industry experience and most importantly, the ins and outs of a highly exclusive world. Matteo fine tuned his instrument — by understanding the mechanisms that differ from country to country, learning how to measure losses and successes, and identifying expectations and needs.

At his beginnings, Matteo recounts how Influencer Marketing was still in its early stages, only starting to gain traction in the United States. Inspired by the American business model, Matteo combined his curiosity and expertise with his friendships with Italy’s biggest influencers. These friendships played a pivotal role in his motivation and enthusiasm to put his know-how at the service of talent representation.

After a few years working in the industry in the United States, Matteo returned to Milan to work with Italian media offices. In 2014, Matteo met his future business partner Enrico De Finis, and together they decided to create MB New Media Agency. The cards were dealt — MB New Media became the leading Italian agency shortly thereafter.

Since their first encounter, Matteo and Olivier shared a mutual respect and admiration for one another. Rather than seeing each other as rivals, they quickly realized that they would be stronger together. Their backgrounds were intimately linked: when Matteo was developing Bold, Olivier was developing Ykone. They were often brought to work together, and on very large projects. During a Lancôme event involving Chiara Ferragni, Matteo’s longtime friend, Olivier didn’t hesitate to call on Matteo’s expertise to bring the project to life. After a successful first collaboration in 2019 with the global muse, Lancôme is repeating the experience in 2020, calling on Ykone to orchestrate the project. And it’s no small feat — Ykone is tasked with creating a high level of engagement through a live stream format that involves Chiara demonstrating Lancôme products and answering questions live from a digital audience.

A collaboration built around authenticity, each product was imagined, created, developed and perfected by Chiara in partnership with Lancôme’s global creative director, Lisa Eldridge. Through real-time live streams, the products are subject to absolute transparency, allowing Lancôme and Chiara’s fans to experience their infallibility firsthand. The live process also adds a human dimension, allowing Chiara to establish relationships with consumers and reinforcing their trust in the brand. The task is enormous, and the project proves to be a huge success.

The timing of the pandemic was decisive in the decision to bring YKONE and MB New Media together. Long and warm dinners were organized, an intimate setting in which Olivier, Angela, Enrico and Matteo met regularly in Milan to discuss their common future. Just like a future groom paying visit to his future bride’s family, the four soon-to-be partners discussed their visions, goals, fears, successes, and dreams.

It soon became clear that the two agencies were a match made in heaven. YKONE for its expertise in digital strategy and data analysis thanks to the Campaygn software, and their strategic international network of creatives, and MB New Media for its production capacity, influencer relations and talent management division. The plurality of their respective talents could only reach symbiosis once joined together. This perfect match was the ideal way to offer brands the best solutions to carry out all their projects.

If the decision to play the same score with four conductors was an obvious one for Matteo and Olivier, it would require both orchestras. YKONE and MB New Media merged their two teams together to share partners, clients and creatives under one roof, working hand in hand in perfect symphony.

Today, the Italian team is composed of about thirty people, all driven by the same desire to further progress and perpetuate the savoir-faire that they were the precursors of.

Beyond the Italian and French markets, this union also enhances synergies between Ykone offices internationally, located in Paris, Dubai, Abu Dhabi, New York, Shanghai, Singapore, Hong Kong, Bangalore, Mumbai, Berlin, Geneva and Milan. The newly opened YKONE Hong Kong and Shanghai will work hand-in-hand with YKONE Baldi to guide Italian brands in catering to the Asian luxury market, where a large portion of their market share is still untapped. The agency’s growing international network remains their biggest force, and continues to champion their successes as an ever-growing brand and world leader in influencer marketing.

An international love story that is only just beginning, we invite you to be in attendance for the Italian wedding of the year. Evviva gli sposi!